Discoveries, Inventions and the Cause 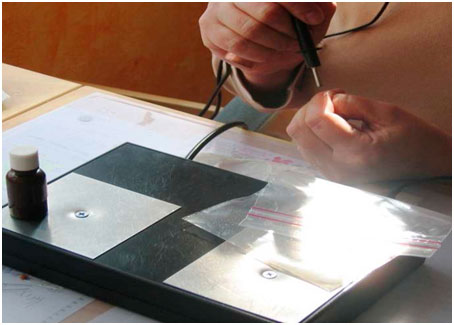 Dr. Clark belonged to the "Bloomington Amateur Radio Club". Thanks to this passion of hers, in 1988 Dr. Clark invented the SYNCROMETER, an audio oscillator circuit device that tunes for and detects the resonance in all things in much the same way a radio tuner locates a specific station. The Syncrometer can scan for anything in the body – be it an object, an organ, a chemical or virus because everything has a characteristic frequency or set of frequencies. Even though not a scientifically approved device, thanks to the Syncrometer, in a period of 20 years, Dr. Clark was able to carry out and pen in 8 books all her research in connection with disease and especially the cause and cure of advanced cancer.

Thanks to her passion for the radio, Dr. Clark understood that the human body broadcasts electrically just like a radio station, but over a wide band of frequencies and at very low wattages, which is why it has not been detected and measured until now.

She started to reason that if the human body broadcasts electrically just like a radio station, then also other organisms must transmit electrically as well. She decided to test small animals such as insects. Even these emitted radio waves and specific frequencies.

With this discovery, Dr. Clark developed the technique of the selective electrocution of undesired visitors in our body. She reasoned: "what would happen if I would broadcast a frequency of a pathogen into the body?" She tried the frequencies of salmonella, giardia and herpes on herself and noticed that within three minutes they were gone.

For years Dr. Clark used a frequency generator to "zap" one pathogen after another. This was very time-consuming.

In 1994 her son built a hand held, battery operated, and accurate frequency generator. The purpose was to kill the intestinal fluke. To her surprise she noticed that this battery-operated zapper killed all pathogens without having to set in a specific frequency.

This was a GRAND invention! Dr. Clark mentioned in her books that the zapper kills small organisms but also re-activates our immune-system.

Dr. Clark came up with other inventions in order to remove body obstacles.

A lover of herbs, plants and of the Indians of America, Dr. Clark very often searched among their herbal wisdom for the ways they cured their ailments. The Indians of America used the hulls of the American black walnut (juglans nigra) with its anti-parasitical, anti-bacterial and anti-viral properties to rid themselves of parasites. She set together a specific parasite cleanse with three ingredients: the green hulls of the black walnut tincture that kills the adult parasites, wormwood that kills the larval stages of the parasite and the cloves that kills the parasite eggs. These three ingredients taken together but as separate ingredients is a very powerful treatment to rid oneself of more than 120 species of parasites without any side-effect.

Dr. Clark had the same approach for the kidney cleanse. It is very important to clean out our kidneys as these are our main excreting organs. Most things pass through the kidneys in order to be eliminated. During the expulsion of toxins the kidneys can be over-burdened and block themselves. This is why it is imperative to clean these precious and vital organs. The Indians of America used many useful kidney herbs with the function of eliminating urinary tract bacteria, removing fungus such as candida, dissolving and eliminated kidney stones. Dr. Clark formulated the best kidney cleansing recipe ever with 7 ingredients in order to achieve this. When you try it, you will notice how powerful the kidney cleanse is.

The Liver cleanse is the most powerful cleanse ever. It should be done after the parasite and kidney cleanse. Why should everyone try this cleanse? Consider these reasons:

The liver cleanse removes stones from the liver and the gallbladder, it removes bacteria, parasites and viruses. Several cleanses over a relatively short period of time are necessary in order to completely clear the liver of blockages. The liver cleanse is a wise practice.

They say that 70% of our immune system is in our intestine. This should be reason enough to gently cleanse our intestines. Dr. Clark's bowel cleanse eliminates flatulences and swollen abdomen by removing harmful bacteria such as shigella, salmonella, e. coli, etc. Once these are gone the good intestinal flora can prosper. Go here for the bowel program

The Mop-up program is a special parasite program for obstinate parasites: ASCARIS and TAPEWORM and their stages. View Mop-up program

In more recent times, Dr. Clark invented ways to "zap" and freshen our food and water with the Food Zappicator. Also the Ozonator does some powerful chemistry on our food eliminating undesiderable hormones, chlorine and dyes

The Tooth Zappicator zaps our teeth from bacteria and hardens dental materials so that they do not seep.

Properly used colloidal silver is a natural antibiotic. It has antibacterial, antiviral, antifungal and antiparasitical properties.

Homeography is putting a frequency pattern of some object or chemical or living thing into water. With this new science, organs can be cleaned out of toxins, pathogens and parasites. Read more on homeography

Dr. Clark always looked for the cause or causes and then looked for ways to eliminate them. The inventions and discoveries mentioned were studied and tested carefully in order to comply with her goal of removing the causes of sickness.

There are many "palliative" treatments available by conventional and alternative medicine for the symptoms of illness.

A "bandage" effect will not remove the cause. Dr. Clark always searched for the causeof an illness and realized there were often multiple causes that could be as unique as the individual experiencing the illness.

Practitioners often claim they have found the one cause and solution to a disease or cancer for the simple reason that they saw their patients recover by removing this one cause. Removing one single cause and therefore breaking the "chain of causes" can have its positive effects. But as Dr. Clark mentioned in her "The Cure and Prevention of all Cancers" book, "the concept is flawed in thinking that for every single disease there is a single cause". The single causes found by Individual researchers contributed to Dr. Clark’s development of her "chain of causes" for cancer and disease.

Also labs test only one carcinogenic substance, or one cause, on a lab animal at a time, but in reality we are bombarded with many carcinogenic substances all at once. This is the reason why the Clark protocol uses many different treatments together in order to interrupt the "chain of causes".