The Bile Ducts and Liver Bile

The bile duct system is a gigantic tree with lots of interconnecting branches. There are miles of bile ducts (50,000 ducts) in the liver. The liver cleans itself by making bile and sends its toxins with the bile into the intestine. Bile is a yellow-greenish liquid secreted by the liver. It is made of water, cholesterol. bile acids and its salts, proteins, bilirubin and fatty acids. It is produced by the hepatocytes (liver cells) and is stored in the gallbladder. If the bile contains too much cholesterol, bile salts or bilirubin , these can harden and form bile or gallbladder/liver stones.

Bile is necessary for digestion. Together with the pancreatic juices, it will enable digestion of fats and vitamins in the duodenum as well as the absorption of calcium and iron. The absorption of fats, lipo-soluble vitamins, proteic nutrients and calcium is dependent on the mixing of the food with bile. 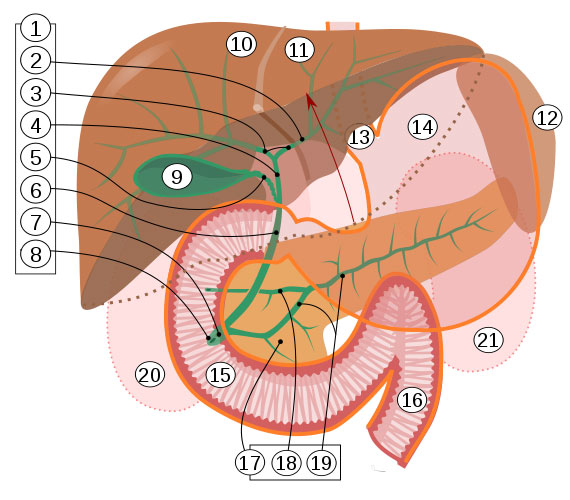 When fats are not absorbed, they remain in the intestine. In this case calcium will not be absorbed leaving the blood in deficit and withdrawing it from the bones.

About 80% of bile is recycled and returns to the liver. The bile is also used to eliminate refuse deriving from the destruction of the red blood cells. It de-acidifies and cleans the intestine.

The presence of liver stones can impede the flowing of sufficient bile, which in turn will neither allow a sufficient flow of the pancreatic juices. If sufficient absorption fails, the body will take the necessary calcium and iron from the bones.

Malabsorption will cause undigested food which in turn will create a proliferation of bacteria.

When fat isn’t absorbed, it stays in the intestine. Fat is lighter than water, it makes the stool float and orangish. Feces should not float. When the stool floats you can assume that calcium isn't being absorbed either, leaving the blood in a deficit which will be taken from the bones.

Over a quart of bile should exit the body each day. Since bile is loaded with cholesterol this daily excretion of bile is a major method of keeping cholesterol levels low.

But if the bile ducts are choked with debris so only half as much bile is produced and excreted you can expect cholesterol levels to rise and digestion to be bad.

There are thousands of bits of "trash" accumulated in the liver bile ducts. They will turn into stones (gallstones) if left in place. To clear the clogged passages of the bile ducts, do the liver cleanse over and over again. However first you must remove living parasites in the bile ducts, otherwise they will not let the bile ducts clear themselves. Only after the parasites are dead will you get a lot of "green stuff' and be able to clear "stones" out of your bile ducts.

Only one large duct at a time will clean itself. We have hundreds of larger ducts and thousands of tiny ducts feeding into the larger ones, so it will take about 2 years to clear out about 2000 to 3000 stones.

(Extracted from The Cure for all Diseases)
(Wikipedia)