We all have Parasites

Humans, like other animals, have always had parasites, both outside and inside our bodies. It is easy to see in animals when you dissect a frog or fish in a college classroom. You would be taught that every organ has its parasite. Some are flukes, some are roundworms, some are tapeworms.

Flukes are like little leeches, stuck in one spot, just feeding and releasing eggs. The animal with the adult fluke is the primary host. The animal with the larvae is the secondary host, usually a snail. Inside the snail the larvae go through developmental stages that suits the parasites' need to, somehow, hitchhike from animal to animal till it can reach its primary host again. This has changed since immunity has dropped. The Syncrometer finds that instead of requiring a single, specific snail, many snails can be used as the secondary host. Lowered immunity allows shortcuts to be taken by the parasite because the vigilance of the immune system is gone.

Humans go through infancy, childhood, teenage, and adulthood, to reproduce and arrive at infancy again. All with the same purpose: to survive and thrive. Our parasites survive with us, but how they will thrive depends on our health. They do not thrive when we are healthy. It is the less healthy animal that is the most parasitized in Nature.

Parasites do not thrive when we are healthy

In times of plentiful, nourishing food and clean water for animals, parasites do not take over the host animals. But if food is scarce, and the water source is crowded with other animals, their general health declines and parasites thrive instead.

The roundworms look a lot like earthworms without feet, or means of travel. A roundworm just wiggles and molts its skin off a number of times to grow till it is an adult. Our common roundworms are Ascaris, Strongyloides and filaria (long, thin filaments) like heartworms. Cats have learned to spit up their Ascaris by eating grass. Puppies, too, are taught to eat "dog grass" to entangle their stomach Ascaris and spit them up. But humans, with all their intelligence, seem to be doing nothing to keep their parasitism in check.

The Syncrometer® shows that we all, from early childhood, harbor Ascaris eggs and larvae, the young hatchlings that go through molts. These tiny wormlets, too small to see, give us seizures, eczema, the common cold, adn our childhood diseases. .

Parasites even live in other parasites. They have their own bacteria and viruses. The bacteria themselves have viruses. And, at least one bacterium, common Salmonella, has prions.

Ascaris brings us Chicken Pox and mumps, Herpes 1 and 2, Coxsackie viruses, and Adenovirus (the common cold). It brings us Mycobacterium avium that causes night sweats. We didn't notice these connections in the past because these diseases are commonplace and the parasites so tiny and quiet.

It takes a special astuteness to be suspicious of commonplace things. Ancient and primitive societies had special astuteness. Why did the Hebrew nation ban pork in the diet? Did they notice that herdsmen of swine often had epilepsy, skin disease and other health problems?

Modern American citizens have some astuteness, too, having recognized that smoking cigarettes often leads to lung cancer.

Strongyloides bring us migraine headaches and maybe our addictions as well as the very beginning of all tumors, as we will see. Which problem they bring depends on where they colonize and what we, the host, are eating.

The filaria are as thin as a single filament of silk, but very long so they can make a tangle of themselves and trap other cells. Dirofilaria is the common heartworm of dogs. It is a major contributor to all heart diseases. Since our lives are ended in heart disease more than any other way, heartworm should really have our greatest attention. So far, the Syncrometer has found it not just in the heart, but everywhere we have fluids. Our eyes even have tiny threads of filaria suspended in their fluids. The chest with its lymph fluids around the lungs has heartworm bits. The belly with its peritoneal fluid has its short bits. If any of these short pieces of Dirofilaria manage to escape both the immune system and your digestive enzymes so that it can grow long, it produces a snarl. Such a snarl is the starting point for Hodgkin's Lymphoma, but non-Hodgkin's abdominal tumor masses, grow with Onchocerca, another filaria. Heartworms have gained ground in us by growing longer, even inside the bowel, so their clear glass-like threads make loops in the bowel contents, easy to recognize.

Onchocerca has gained ground too. Its stages hide in our vein valves, giving us blue varicose veins. It gives us small hard nodules under the skin.

For animals it is the availability of clean food and water that decides if they are heavily parasitized and short-lived.

For humans it is also the food and water that decides our health and whether we are heavily parasitized and destined to a life of low energy and lots of medicine.

Food and water decide if we will be heavily parasitised.

For humans, unclean food and water has brought immunodepression, so parasites can increase
Water has brought these critical immune system depressants: PCBs, benzene, asbestos, azo dyes, heavy metals, motor oil and radioactive elements. Food has brought the same depressants, through food processing that uses the same polluted water to accomplish it all.

As a result, humans now have 4 very common flukes, besides Fasciolopsis: the sheep liver fluke, the lung fluke, the pancreatic fluke and human liver fluke. Don't believe that the sheep liver fluke is for sheep alone. Hosts can be substituted when immunity is down so that we can become the "accidental" host or "incidental" host, already known for decades. Less common flukes are becoming more common, too, such as Gastrothylax, which brings us Cystic Fibrosis, Down's Syndrome and Polycystic Kidney Disease, 3 genetic diseases. Echinostoma revolutum, the parasite for all wheelchair cases and Echinoporyphium recurvatum one of our diabetes parasites (besides pancreatic fluke) have gained ground too. You may see any of these now while you are killing parasites with a vigorous program that induces a brief diarrhea. Get a strong flashlight and keep plastic cups and utensils in the bathroom, as well as Lugol's iodine, so you can see your own parasites safely and identify them. 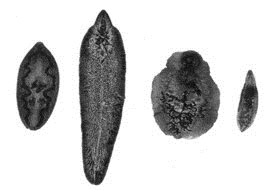 kill flukes. It is a combination of Black Walnut hulls (still green), wormwood leaves and cloves, very freshly ground. A slow, easy to manage pace is given in earlier books to help those who must be cautious about new treatments. If you are inexperienced with herbs, you should try a very small dose first and work up to the really effective doses.

Herbs are our greatest gift on this planet! They do not have one active ingredient that kills a parasite or kills bacteria or viruses. Each herb has many active ingredients. The concept of extracting one principle compound, and making its "sister" chemical (analogs, derivatives) is seriously flawed. An active ingredient, such as l-ascorbic acid, for example, has its "sisters" right with it in Nature!

Potency of an herb does not depend so much on the amount of active ingredient you eat. Potency is increased much more by eating all the natural "sister" compounds, which means, the herb intact. Rose hips have much more potency than l-ascorbic acid. The Syncrometer® shows that several nuts or a few rose hips can accomplish much more than plain germanium capsules or pure vitamin C.

For this reason and because herbs belong to you, being your own true treasure, I have chosen herbs wherever possible to deparasitize yourself, kill bacteria and viruses, and maintain your health in a regular way. This is besides electronic and other ways I will discuss later.

Parasites in the Hypothalamus

In a healthy person chlorogenic acid goes straight to the hypothalamus after eating it. But in five minutes, at most 20 minutes, it is gone. It has been detoxified, digested, or removed.

In a cancer patient it never disappears. A tiny wormlet is present, microscopically small. It is Strongyloides stercalis. This wormlet belongs to the roundworm family, not the flukes, nor the tapeworms. Its larval stages have molts. Molting brings special molting chemicals. Perhaps it is one of these that interfere with the removal of chlorogenic acid from the hypothalamus. Maybe this wormlet needs this food antigen to molt or accomplish other purposes. The worm is never there unless chlorogenic acid is there.

Phloridzin, too, goes directly to the brain, lodging in the pituitary gland even in healthy persons. But it is there only for minutes. Then it has already been removed.

In a cancer patient it is always there. This irritating allergen is present constantly-yet only if the common human liver fluke is there. Somehow this parasite prevents the removal of phloridzin or, again, perhaps it needs it. The human liver fluke is a small parasite, less than 1/4 inch long even when it is stretched flat. Its scientific name is Clonorchis sinensis.

Human liver flukes very common, and like are Strongyloides, they become more plentiful as we age. It is not surprising that they play a role in cancer. In fact, scientists in Asian countries have often proclaimed their theories that this fluke actually is the chief cause of cancer, at least, liver cancer. After a traditional liver cleanse you may see dozens of these in the toilet bowl, but having shrunk to 1/8 inch to 1/16 inch in length, they go unnoticed. The association between this fluke and liver cancer has been studied for decades. The fact that it plays a role in every cancer would be more obscure, without the technology of the Syncrometer®.

The smallest piece of apple,a wedge the size of a penny, brings phloridzin to the pituitary gland in the brain, and some to every other bit of pituitary in the body, such as bits traveling in the blood and lymph. It only persists, though, if Clonorchis is present.

Parasites in the Pancreas

The food allergen, gallic acid, has accumulated in the pancreas in cancer patients. Again, there is an associated parasite; this time it is the pancreatic fluke, with the scientific name, Eurytrema pancreaticum. This is the same parasite that brings us diabetes. It is very common, probably due to our consumption of non-sterile dairy products. Cow's milk and cheese always have eggs and larval stages of the pancreatic fluke. Its essential role in the initiation of cancer could not have been guessed because milk drinking and cancer seem quite far apart. Without Eurytrema, gallic acid does not accumulate; in fact, it is gone in minutes! Nor does the pancreas begin its micro-explosion.

All three parasites must be present to make the three food allergens pile up at the three organs involved in starting a tumor. Without them no sticky "snowball" could form to become the tumor nucleus.

Not only should we avoid the foods with these allergens, we should kill the parasites responsible for it all. We will have 3 more links to perfect prevention of cancer.